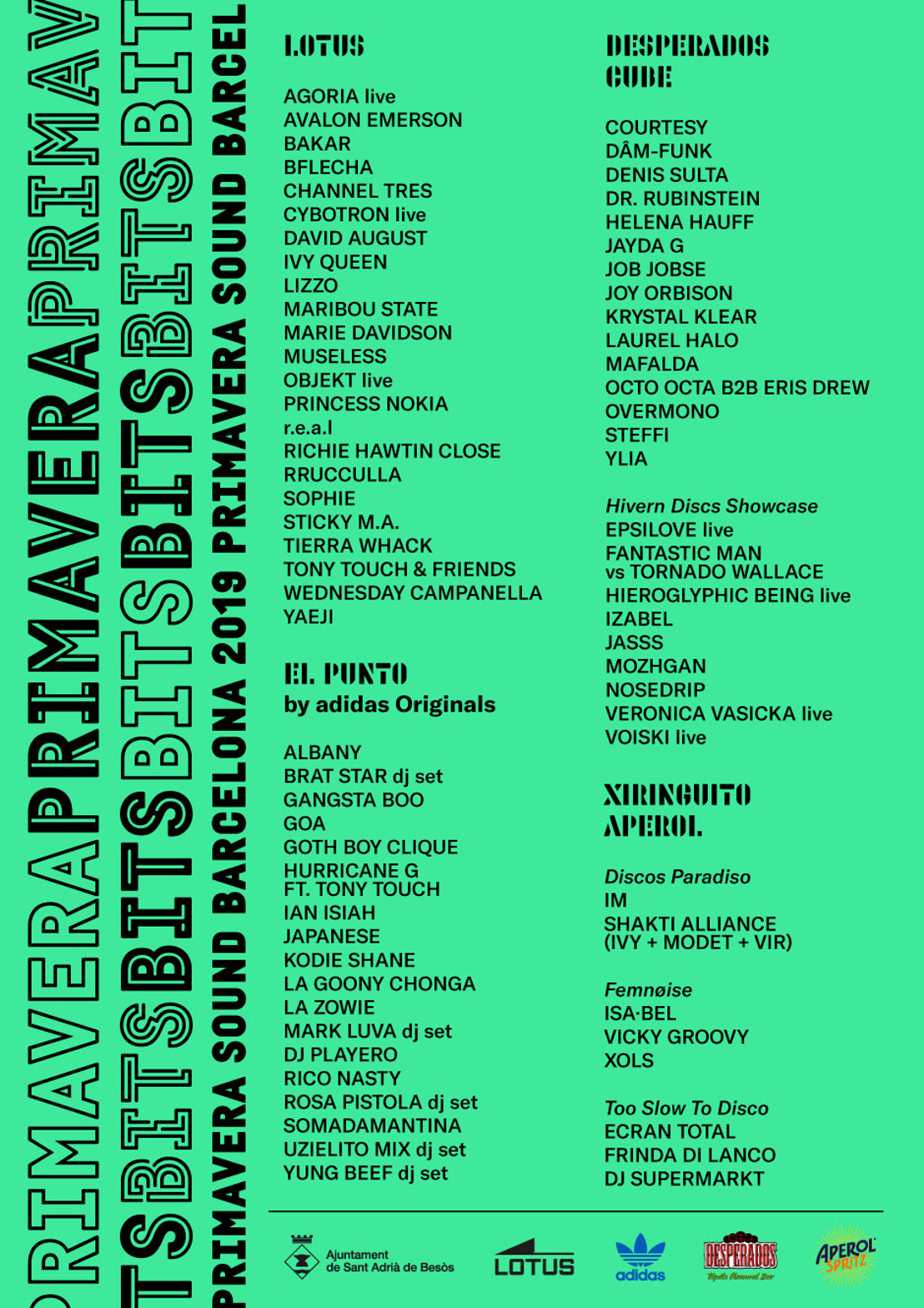 Each stage comes with a surprise this year: the main stage will now go by the name of Lotus and will be right by the beach with views of the sea; the club stage will also move and become the Desperados Cube, the name itself gives clues as to what it will be; the Xiringuito Aperol will this year be commanded by electronic music collectives who will welcome festivalgoers at the start of each day; and EL PUNTO by adidas Originals that will be a stage with a dance floor which is a street football pitch to mark the tenth anniversary of the brand's sponsorship of the festival.

With Primavera Bits, Primavera Sound is a bit more festival of festivals. Below you can check out the distribution of artists per stage in this microcosm located at the northeast end of the Fòrum.

What is it? The Primavera Bits’ stage on which everything fits.
Where is it? It is moving on to the beach. Spacious, sunny, eclectic and with views of the sea.
What can I see there? Artists that will make you dance to different genres and proposals: from reggaeton to experimental electronic music, from hedonistic house to j-pop, from trap to ultravitaminated pop, this stage knows no bounds.
When? The usual time (that is 6pm to 5am).
Who’s playing? AGORIA live / AVALON EMERSON / BAKAR / BFLECHA / CHANNEL TRES / CYBOTRON live / DAVID AUGUST / IVY QUEEN / LIZZO / MARIBOU STATE / MARIE DAVIDSON / MUSELESS / OBJEKT live / PRINCESS NOKIA / r.e.a.l  / RICHIE HAWTIN CLOSE / RRUCCULLA / SOPHIE / STICKY M.A. / TIERRA WHACK / TONY TOUCH & FRIENDS / WEDNESDAY CAMPANELLA / YAEJI

What is it? A cube. Yes, you read right: a cube. With the audience dancing around it.
Where is it? Crossing the bridge towards Primavera Bits, on the left-hand side. Where the main stage used to be. You can’t miss it.
What can I see there? Non-stop sessions by all the DJs and producers that you wanted to see this year, with an all-day showcase by the label Hivern Discs on Saturday. House, techno, disco, funk, electro… Let’s dance.
When? From the early hours of afternoon sun until dawn. This is where we welcome the new day dancing.
Who’s playing? COURTESY / D M-FUNK / DENIS SULTA / DR. RUBINSTEIN / HELENA HAUFF / JAYDA G / JOB JOBSE / JOY ORBISON / KRYSTAL KLEAR / LAUREL HALO / MAFALDA / OCTO OCTA B2B ERIS DREW / OVERMONO / STEFFI / YLIA / Hivern Discs Showcase: EPSILOVE live / FANTASTIC MAN vs TORNADO WALLACE / HIEROGLYPHIC BEING live / IZABEL / JASSS / MOZHGAN / NOSEDRIP / VERONICA VASICKA live / VOISKI live

What is it? A real beach bar on the sand where you can spend the early hours of the festival: with its sun loungers, its spritz, its chill and, like last year, its paellas by the Kauai restaurant.
Where is it? On the beach, so that you can dance with your feet in the water. Don’t worry: we will supply the towels.
What can I see there? Showcases by well-known electronic music collectives that will be in charge of getting the festival off the ground on the right foot for you and your friends.
When? From 2pm until the other stages of the festival start their programme.
Who’s playing? Discos Paradiso: IM, SHAKTI ALLIANCE (IVY + MODET + VIR) / Femnøise: ISA·BEL, VICKY GROOVY, XOLS / Too Slow To Disco: ECRAN TOTAL, FRINDA DI LANCO, DJ SUPERMARKT

What is it? The new member of the family: a stage curated by Yung Beef that brings together the past, present and future of urban sounds. Its dance floor is a street football pitch, sky’s the limit!
Where is it? Behind the Lotus stage, in what is known as La Plaza.
What can I see there? Promising newcomers on the trap scene, godfathers of reggaeton, elusive crews and icons that you thought you would never see live.
When? It is a 100% nocturnal stage: don’t even try to find anyone here in the daylight.
Who’s playing? ALBANY / BRAT STAR dj set / GANGSTA BOO / GOA / GOTH BOY CLIQUE / HURRICANE G FT. TONY TOUCH / IAN ISIAH / JAPANESE / KODIE SHANE / LA GOONY CHONGA / LA ZOWIE / MARK LUVA dj set / DJ PLAYERO / RICO NASTY / ROSA PISTOLA dj set / SOMADAMANTINA / UZIELITO MIX dj set / YUNG BEEF dj set

If you still want to go back over the bridge, at the rest of the festival there will be sets by Nina Kraviz, Peggy Gou and Modeselektor live, the exquisite live show by Apparat and the fantastic atmosphere of the Tim Hecker & Konoyo Ensemble, the delirium of Mykki Blanco, Yves Tumor (this time accompanied by a band), the new live performance by Danny L Harle, Iglooghost and EBM (with B) by Nitzer Ebb. Without forgetting the Ray-Ban Studios (FKA The Warehouse), a cavern of infrasounds soon to be disclosed as an indoor space that is focused on the genre’s most extreme proposals. From Primavera Sound to heaven... electronic heaven.