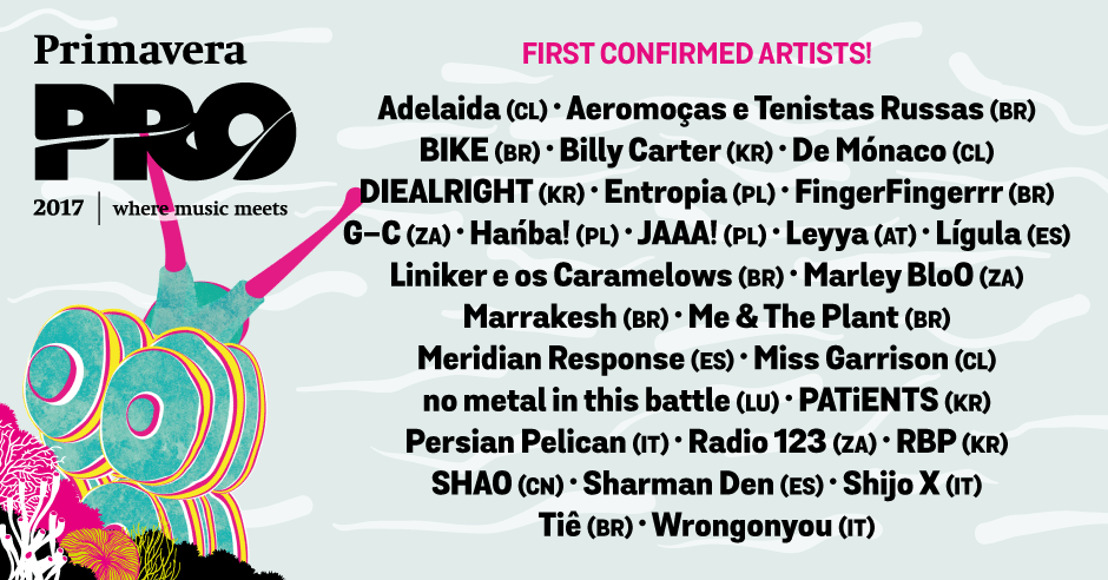 The first list of confirmed names is made up of 29 artists from 10
different countries. The now traditional presence of such significant
countries as Brazil (through A CONSTRUTORA MÚSICA E CULTURA and
BALACLAVA), South Africa (IMEXSA), Poland (DON’T PANIC, WE’RE FROM
POLAND!), Chile (IMI CHILE), Luxembourg (MUSIC:LX) and Italia (A BUZZ
SUPREME/MODERNISTA) will be reinforced by artists from Austria (AUSTRIAN
MUSIC EXPORT) and China (with the backing of SOFTX), whilst South Korea
expands its participation (through ZANDARI FESTA and MU:CON) thus
demonstrating the emergence of the Asian music scene and the growing
interest that it is arousing in Europe.

But there will not only be artists from the other side of the world:
there will also be the pool of emerging Spanish artists which will be
very well represented with the participation of two Valencia bands with
the support of SOUNDS FROM VALENCIA and the band which won the
competition BALA PERDUDA (in this case SHARMAN DEN from Barcelona with
their rock 'n roll with classical overtones). The bands will perform
both on the Day Pro stage in the Pati de les Dones of the CCCB -open to
the general public- and on the Primavera Pro stage on the Parc del
Fòrum site, thus reaching a potential audience of thousands.

Last year there were 82 concerts given by the 42 participating bands
during the five days of the festival, and this year we already have the
first 29 names. As always, stylistically the range will be incredibly
rich and diverse and will include many proposals from the delicate pop
by the emerging Brazilian star TIÊ to the unrestrained blues by BILLY
CARTER, passing through hip hop from G-C, the post rock of RBP and NO
METAL IN THIS BATTLE, the overpowering electronic music by Chinese
producer SHAO, the unforgiving metal of ENTROPIA, punk rock by PATIENTS,
canonical indie rock by ADELAIDA and the unclassifiable proposal from
the versatile MARLEY BLOO from South Africa. The Brazilians AEROMOÇAS E
TENISTAS RUSSAS, and MARRAKESH will deliver their respective dimension
of new wave psychedelia that is making a killing, while WRONGONYOU,
JAAA!, DE MÓNACO and SHIJO X will do what they do best with their own
versions of pop and FINGERFINGERRR and HAŃBA! promise to give the two
most dance floor-filling concerts of this edition thanks to their
infectious garage and punk-folk respectively. Wistful shoegaze by BIKE,
sunny pop-folk from ME & THE PLANT and the dreamy character of PERSIAN
PELICAN, MISS GARRISON and MERIDIAN RESPONSE, danceable soul by RADIO
123 and LINIKER E OS CARAMELOWS, DIEALRIGHT's devastating post-punk,
art-pop from Valencia with LÍGULA and the cutting edge electronic pop
of LEYYA make up this first batch of bands that for yet another year
give testimony to a vast as yet unexplored terrain.

PRIMAVERA PRO 2017 will take place from 31st May to 4th June in
Barcelona and will include the participation of such voices of
authorities as are Bill Drummond (The Justified Ancients of Mu Mu / The
KLF), Imogen Heap, Viv Albertine (The Slits), Billy Bragg and the
producer Martin Glover (Youth), and many more still to be confirmed, to
tackle the challenges in the present and the future of the music
industry.

Check all the confirmed artists here