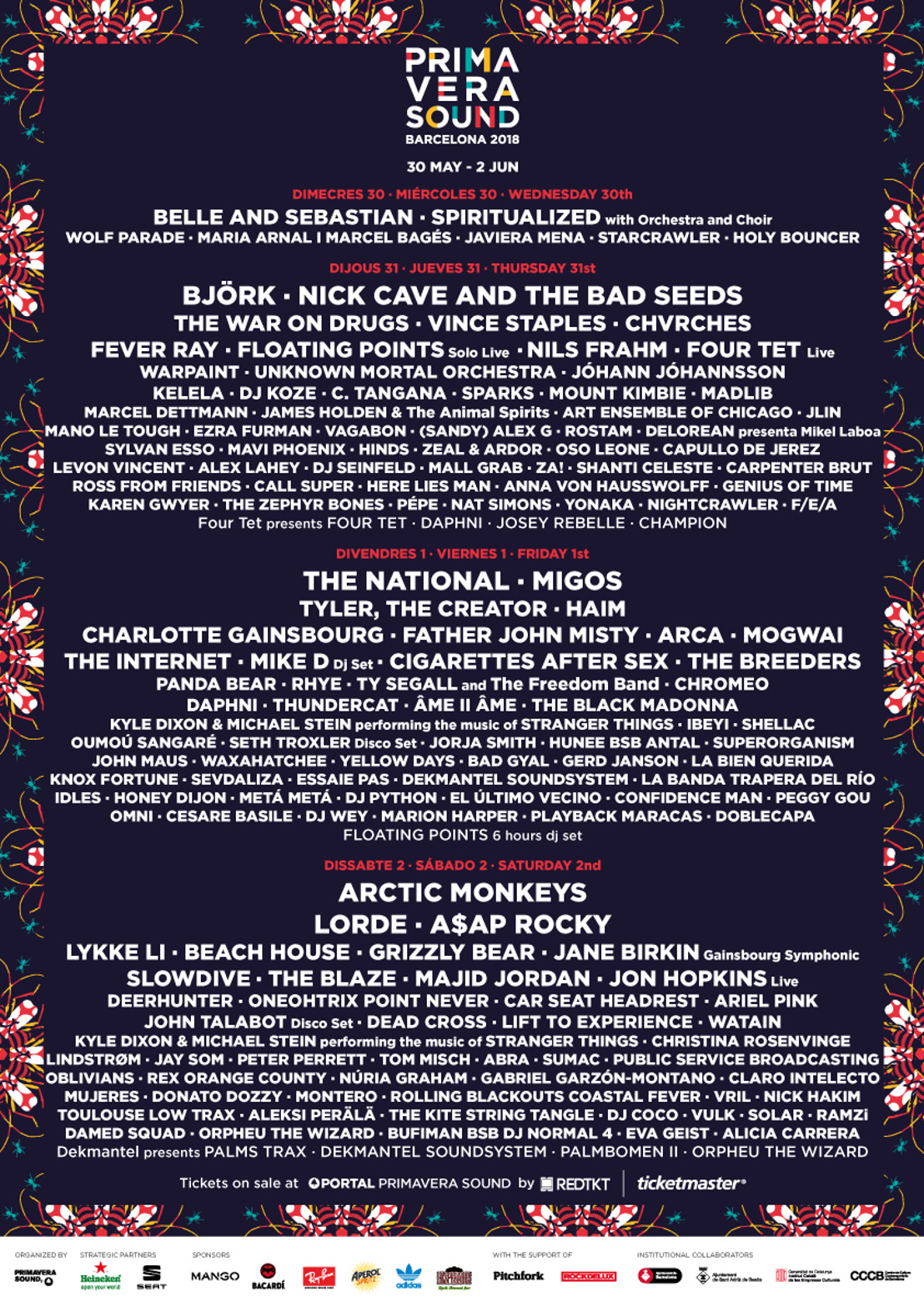 In these times of fragmentation and impatience, Primavera Sound remains committed to storytelling. The festival lineup cannot be understood only via its individual parts as each artist has been meticulously chosen and plays an integral part: each name has its raison d'être. That is why the free jazz legends Art Ensemble of Chicago can coexist alongside the all stars of hardcore Dead Cross (with Mike Patton from Faith No More and Dave Lombardo from Slayer), a flamenco freethinker such as Capullo de Jerez alongside local punk heroes La Banda Trapera del Río, the master of soundtracks Jóhann Jóhannsson alongside the unclassifiable Sparks, the return of Mike D (revisiting the classics by the much-missed Beastie Boys), John Maus and of Peter Perrett of The Only Ones, the new radical project by Fermín Muguruza with The Suicide of Western Culture alongside the celestial post-rock by Lift to Experience, Madlib's futurist sound and the African tradition of the diva Oumou Sangaré, or Watain's black metal alongside the electronic experimentation of Nils Frahm. Altogether they make up the character of Primavera Sound.

A LINEUP WITH GRRRL POWER

Year after year, the booking team takes into careful consideration the representation of very diverse origins, sensitivities and backgrounds. In 2018, Primavera Sound yet again backs girl power. Stars such as Björk and Jane Birkin head an array of talent which includes impressive figures: starting with Jane and Serge's own daughter Charlotte Gainsbourg, continuing with Haim, Fever Ray, CHVRCHES, Beach House, Warpaint and ending with the return of Lykke Li. There will also be emerging artists such as Lorde, Ibeyi, Maria Arnal, Hinds, Waxahatchee, Yonaka, Vagabon, Jorja Smith, Javiera Mena, Jlin, Bad Gyal and Sevdaliza who are the future of music. At all hours, in all styles, on all the stages: women are the driving force.

A LINEUP WITH FLOW

In parallel, black music continues to gain ground throughout Primavera Sound, a reflection of the current music scene. This edition will welcome a new king of hip hop, A$AP Rocky –who will come with his third eagerly awaited album– and the trap trio Migos –who became the sensation of 2017 thanks to their anthem Bad and Boujee. The festival's long-running commitment to this genre is confirmed with the return of its prodigal children Vince Staples and Tyler, The Creator, with two of the best albums of 2017, as well as Drake's protégés Majid Jordan and the regeneration that The Internet, Thundercat, Jorja Smith and Kelela bring with them, to mention just a few.

As well as looking back for generational references and towards other latitudes to search for new voices, the Primavera Sound lineup always takes the pulse of contemporary music. This year it will welcome the Venezuelan Arca, one of the most extraordinary characters to emerge over the last few years, who will present his acclaimed eponymous album, one of the hits of 2017. And also Maria Arnal i Marcel Bagés, who have triumphed on the Spanish scene thanks to their avant garde folk song debut 45 cerebros y un corazón. At the same time, the rise of new urban music in Spain will be represented by the unstoppable C. Tangana (on his third visit to the festival in a row) and by the very young and already international Bad Gyal, without forgetting the recent phenomena Cigarettes After Sex and Rhye or the new dimensions of indie rock represented by Rolling Blackouts Coastal Fever and the Mallorca band Oso Leone, who will at last reveal the tracks from their third album. Constant renovation.

A LINEUP FOR DEVOTEES

Consolidated as a reference event internationally, Primavera Sound never forgets its origins. Shellac will once again give vent to their animal rock at the festival as they have at every previous edition, and again DJ Coco will wrap it all up with his festive communion-like session. Also, for the fifth year running, the Barcelona DJ and producer John Talabot will bring his now famous Disco Set to the electronic area of the festival.

In this regard, the Parc del Fòrum will once again be visited by artists who are now part of the family and that embody the Primavera Sound DNA: from Beach House, with the only European festival concert they will give in 2018, to Mogwai after their unexpected appearance last year, as well as Slowdive in an absolute state of grace (their comeback tour started at Primavera Sound 2014), Deerhunter, Father John Misty, Belle and Sebastian (who will play for free on Wednesday as part of the inaugural day), Ariel Pink, The Breeders, Spiritualized, Ty Segall and The Freedom Band, Unknown Mortal Orchestra, Panda Bear and, from the local scene, Delorean, La Bien Querida, Za! and Christina Rosenvinge. Our house is their house.

A LINEUP WITH NO SMALL PRINT

Today's unknown bands will be tomorrow's headliners. This has become a Primavera Sound axiom and in 2018 will be borne out by the silky voice of Jorja Smith, who marks a turning point in British soul, the producer Knox Fortune (who has already collaborated with Kanye West and Chance The Rapper), the impressive Starcrawler and Yonaka each one from a different side of the Atlantic, the exceptionally gifted Rex Orange County and the sassy Hinds, the millennial synth pop by the Australian The Kite String Table, the fluorescent explosion of Superorganism and the voices of the future Yellow Days, Sevdaliza, Nick Hakim and Mavi Phoenix. You won't need a magnifying glass as they boldly stand out.

A LINEUP FOR THE DANCE FLOOR

At Primavera Sound 2018 there will also be space for dancing. More space than ever, because the electronic music stages of the Primavera Bits will increase to host even more sessions by DJ and producers by the sea. The beats lineup will cater for all tastes: from the presentation of new albums by reference artists Jon Hopkins, James Holden & The Animal Spirits and Four Tet to the incredible audiovisual show by the French duo The Blaze, from the dance funk of Chromeo to the alien footwork of Jlin, from Mount Kimbie's analogical experiment to the techno beats by the South Korean artist Peggy Gou. From the celebration of dance without frontiers by Hunee b2b Antal, Floating Points (both live and with a 6 hours DJ set), Dj Köze, Lindström and Dekmantel Soundsystem to the consolidated club proposals from The Black Madonna and Daphni, without overlooking the new sensitivities such as DJ Seinfeld's lo-fi, two of the incarnations of the elusive Brian Piñeyro (he's both DJ Wey and DJ Python) or the killer DJ Shanti Celeste from Chile. Euphoria and sweat on the dance floor.

MORE THAN A LINEUP/ UN CARTEL ABIERTO A LA CIUDAD

In this regard, and as usual, Primavera Sound will open up to the whole city with its complementary programme in which Sunday 3rd June in plaza Joan Coromines (CCCB) stands out with such significant artists as Rhye, Waxahatchee, Fermín Muguruza eta The Suicide of Western Culture and the Oblivians, who will be performing for free. During the weeks leading up to the festival Primavera als Bars and Primavera als Barris will take place (also free of charge), and in the week of the festival itself Primavera als Clubs will kick off, in the two rooms of the Apolo, with artists of the caliber of Ariel Pink, The Sea and Cake, Joe Goddard, Mount Kimbie Djs, The Men and Kero Kero Bonito, performing exclusively for holders of the full festival ticket.

This year for the first time, the Auditori del Fòrum will open its doors on the Wednesday to host the concerts by Spiritualized and by Maria Arnal i Marcel Bagés. A full festival ticket will be needed to gain access to these two concerts, however all the outdoor concerts on the Wednesday in the Parc del Fòrum will be free. The Auditori del Fòrum will function as every year on the Thursday, but on the Friday and Saturday the concerts will move to the Auditori de Barcelona (c/ Lepant, 150). This venue, only a few minutes away from the Parc del Fòrum by public transport, will host two identical concerts consecutively by Kyle Dixon & Michael Stein from S U R V I V E performing the soundtrack from the series Stranger Things. These concerts will held be before the festival doors open in the Parc del Fòrum, and access will be through the usual channels.

With the lineup announcement a long month of expectation and uncertainty ends, a period which started mid-December with the hanging of a giant billboard near the Apolo of Barcelona with the sentence "Això no és un cartell" ("This is not a lineup"), a homage to the famous piece by René Magritte The Treachery Of Images. Hours later came the viral video showing the reactions of 10 fans from different parts of the world on being the first to discover the lineup. And now, after a long journey in the desert in western format that has taken a whole night, this is, at last, the Primavera Sound 2018 lineup.

... A LINEUP THAT IS NOW YOURS

Many months of searching and selecting have gone into building Primavera Sound's eighteenth lineup. It is a lineup that, as always, is many lineups in one and allows for as many interpretations as there are spectators. Now it is up to you to bring it to life.

Primavera Sound has the support of Heineken and Seat as strategic partners and of Mango, Apple Music, Bacardi, Ray-Ban, Aperol, adidas Originals and Desperados as sponsors. Vueling and Movistar will once again be the official airline and technological partners. As they constitute one of the main cornerstones of the festival, Primavera Sound wants to express its gratitude for the dedication they demonstrate every year to the organisers, the artists and the audience by designing contents and actions with added value for the festivalgoers which we will reveal over the coming months.

In short, Primavera Sound would not be possible without the musicians and the fans. That is why the festival wants to thank the constant support over the years from the people of Barcelona and will do so by offering a discount of 16% on the final price of the full festival ticket to all those who go to La Virreina (La Rambla, 99) and certify that they were born or are residents in the region of Barcelona (Barcelona, Sant Adrià del Besòs, Badalona, L'Hospitalet de Llobregat and Santa Coloma de Gramenet). In order to benefit from this discount one of the following papers will be required: ID card, library card, rent bill, utility bill or a resident registration certificate. Moreover and in order to make culture more accessible to young people, the same discount has been activated for people under the age of 30 who have the Carnet Jove. In both cases it will be possible to buy the full festival ticket for 180€ plus distribution costs.