Electronic sounds intensify their presence in the artistic programme at the seventeenth edition of Primavera Sound in Barcelona. During the three main days of the event, from Thursday 1st June to Saturday 3rd June, the festival will offer a proposal that under the name of Primavera Bits will focus solely on this genre. Product of close collaboration with the municipality of Sant Adrià de Besòs, the site will expand beyond the Parc de la Pau to include the area next to the beach of the Fòrum, a natural environment of grass and palm trees just a few metres away from the Mediterranean Sea.

During the 18 hours of daily-uninterrupted programming, a total of 62 performances will take place in this expanded area of 12,000 m2 (5000 more than last year) that also doubles its capacity to 10,000 people. An important innovation this year is the incorporation of a second stage exclusively dedicated to live performances that will cohabit with the impressive number of DJ sessions programmed.

The already extensive line-up is now complemented by the presence of the vocalist and keyboardist of Hot Chip Alexis Taylor, the house and techno juggler Jackmaster, Fairmont with his dark and smooth vision of dance music, the glacial alchemy of Kiasmos in DJ set format, the dance floor geniuses Marvin & Guy, the 4X4 house DJ Ian Pooley and Golden Bug with his imaginative cross between techno and disco, as well as sessions by artists already present in the line-up such as !!! (Chk Chk Chk), Sinkane and Patrick Codenys, member of the legendary Front 242.

The brand-new Desperados Club will kick off at midday and will host the now classic Bowers & Wilkins Sound System, repeating once again its annual collaboration with the festival. With the extraordinary sound quality that characterises the prestigious speaker brand, its booth will be manned by outstanding artists including the renowned DJ Dixon and a live show by Âme both on the German label Innervisions, John Talabot from Barcelona leading the showcase of his label Hivern Discs with a special disco set, dance-floor eclecticism by British DJs Joy Orbison and Ben UFO, the founder of Kompakt Michael Mayer, the impressive heterodoxy of Avalon Emerson, disco and house fun by Kornél Kóvacs, the underground sounds of Aurora Halal, UK bass by Pearson Sound, techno with hints of acid from Matrixxman and the new incorporations Kiasmos, Jackmaster, Patrick Codenys, Alexis Taylor and Ian Pooley.

This unique space, which is built from organic and industrial materials, will undergo a metamorphosis when night falls when a system of coloured led lights will create a unique atmosphere to complement the already evocative auditory and dance experience.

There will also be a considerable increase in the number of shows thanks to the new Bacardí Live stage, backed by the historic house of rums, which will be devoted to live electronic acts. It is on this stage that there will be the most melodic and in some respect the proposals which come closest to pop, such as HVOB, No Zu, Vox Low, Weval, Noga Erez and Marie Davidson, as well as dance floor orientated projects including Bicep, Henrik Schwarz, KiNK, Recondite and Abdulla Rashim. All of this without forgetting the groovier sounds of artists including Lord Of The Isles, Romare, Fatima Yamaha, Tuff City Kids, Moscoman and the exclusive presence of Wolfgang Voigt Gas, pioneer in the fusion of ambient and techno.

From the substantial representation of local talent the live comeback of Ferenc on the German label Kompakt stands out, as well as the DJ set by one of the revelations of the year in the most experimental electronic dance music terrain Pedro Vian. Along with these, the infallible live performances by InnerCut and Sau Poler and the indisputable sessions of Shelby Grey, JMII and the people behind the Barcelona record shop Discos Paradiso will enhance the impressive local scene that the festival has always backed.

As at the last edition, the site will be connected to the beach via an access near the Desperados Club that will be open from midday to 9 pm and there will be towels, showers and changing rooms for those who want to cool down in the sea. The food on offer will cater for all tastes with its selection of bars, food trucks and the picnic area. At the same time Casa Bacardí will have a wide and varied cocktail selection.

It is also worth noting that, although the majority of the electronic programme will be concentrated in this area, it will cohabit with other genres in the line-up reverberating around other performances like that of the maestro of experimentation Aphex Twin, The xx who are getting more and more into electronic rhythms, Sampha’s neo-soul, the icon of dance music Grace Jones, the pioneers of industrial music Skinny Puppy, the kings of EBM Front 242, the duo Talaboman’s comeback, the atmospheric sounds of Tycho, new national projects such as Museless, Playback Maracas and SALFVMAN, the club aces Dj Tennis and Marc Piñol, and the American band that are talk of the town thanks to their soundtrack for the series Stranger Things S U R V I V E.

You can now listen to a selection of music by the artists in the Primavera Bits programme on the new Primavera Sound profile on Apple Music. 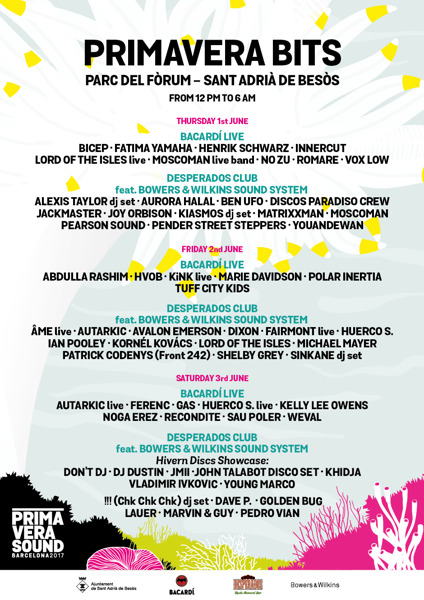